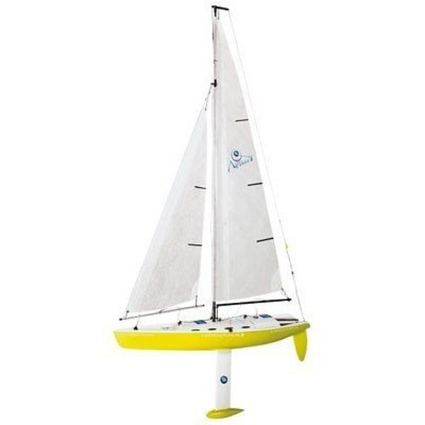 WHAT BOATS WE SAIL AND HOW WE RACE

The Nirvana is 32” long and is five feet tall. It can be taken to the pond in most crossovers and cars completely rigged. When new, it is mainly preassembled and takes less than an hour to rig and put in the water.

The DragonFlite 95 is a yacht designed to be a convenient size, on and off the water.  It’s light weight and long, narrow hull give it the kind of light wind performance most other radio yachts can only dream of.   This multi-rigged boat excels in a large range of wind conditions. As a Restricted One-Design boat, skippers will be putting their sailing skills to the test not their wallet. It promises close and exciting racing in an affordable and easily maintained design. 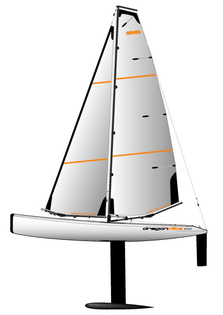 The club holds regular racing events on Tuesdays and Thursdays starting at 1pm.
The Nirvana class sails two heats starting at 1pm, then the DF 95 fleet sails two heats. Typically, six heats are sailed for each class, if conditions allow. The results are recorded separately and Series Awards are made for each class in each of the four series per year.
Interspersed between series racing are named regattas, eg. ‘Lincoln’s Birthday Regatta’, or other types of regattas, such as match racing and team regattas.
Every heat requires skippers to sail a course defined by floating buoys called marks. Each race is overseen by either a single or two Race Officer/s (ROs) who manage the event, judge the starts and finishes, and have the right to disqualify a skipper for a violation of sportsmanship and fair sailing. The Race Officers are skippers on the rotating club schedule which spreads thr RO responsibilities amongst all racing skippwers. All racing is conducted under the current official ISF ‘Racing Rules of Sailing’.

Before The Race
AS racing start at 1pm, you should arrive with ample time to sign in with the ROs and get your boat set up, tuned and sailed on the water for the days racing. Before the day’s racing the RO will hold a skipper’s meeting and review the course.
The courses will be displayed visually on a board in the start area and the rounding side of the buoys will be emphasized. Leaving buoys to port is normal.
Touching any buoy has no penalty on our pond. BUT Buoys not rounded correctly must be rounded correctly to avoid disqualification.

A string representing a boat’s track from the time she begins to approach the starting line from its pre-start side to start until she finishes shall, when drawn taut, (a) pass each mark on the required side and in the correct order, (b) touch each rounding mark, and (c) pass between the marks of a gate from the direction of the previous mark. She may correct any errors to comply with this rule, provided she has not finished.  (RRS 28.2)

Race Starting
Starting is controlled by an audible start sequence.  Skippers will hear:
a warning announcement at the (One Minute Bell),
“One minute to mark”
Boats are now sailing under racing rules and boats on PORT TACK must GIVE WAY to boats on STARBOARD tack.
Skippers will hear:
“30 seconds to mark” RED color group skippers may start.
“15 seconds to mark” YELLOW color group skippers may start.
“Bell sound” GREEN color group skippers may start.
To start properly, you must cross the start line between the starting marks. The start line connects the course edges of the marks, which is the side of the marks away from the course.
If you are over early or outside the start marks you must stay clear of all other boats on port or starboard and return to completely cross the start line and then restart.
If you commit a foul, (colliding with or impeding another boat) after the 1 minute warning, you must take a penalty turn as soon as possible after the Start Signal Bell and in any case before rounding the first mark of the course. The R.O. must be afforded a clear view of the starting line. (RULE 20)

Penalty Turns:
If you impede or touch a right-of-way boat, you must take a penalty.
To perform the penalty maneuver: As soon as possible, get clear of other boats and then make One Complete 360 degree circle, including one tack & one gybe (called a “360”).  When you’re done, resume racing.  (Rule 44.1 & 44.2).
ENTANGLEMENT
An entanglement can be officially declared by the RO in series racing if two or more boats are entangled and cannot separate. If the entire participating fleet passes them, the entangled boats will be given a DNC score with no points implications. At this point skippers who become disentangled can declare ‘Still racing’ and continue with normal place points being awarded, or they may opt for a DNC. This does not apply in Named Regattas where every race score counts and an entanglement will be recorded as a DNF.

Series Racing Scoring and Racing Procedures
Scoring is based on the rank finishing position of skippers in each heat held during a regatta, using the Modified Cox-Sprague scoring system. This scoring system is frequently used in sports that have multiple competitions with varying numbers of competitors. The C-S System allocates points on the basis of fleet size with winners of larger fleet races receiving larger point values according to a table.
Competing skippers are assigned to color groups according to their scoring in the previous series and start with a time handicap related to that previous series scoring.
Three racing groups are used, Red, Yellow and Green. All new skippers will be initially placed in the Red group.
The existing ONE MINUTE countdown clock will still be used. Just a reminder, the Rules of Racing start at the one minute warning!

The criteria for placing skippers in groups for each series will be their rank on the basis of C-S scores in the previous Series races, disregarding their qualification status for awards:

The Color Groups will be revised at the end of each Regatta Series. A skipper may opt to voluntarily move color group to a shorter time handicap group.

A red, yellow or green colored telltale ribbon, provided by the club, will be flown from the masthead of each boat.

For safety reasons a BLACK zone will be used in the starting procedure. This zone must NOT be entered by any boat after the ONE MINUTE warning. The zone is a triangular area from the start line defined laterally by two lines, one from each start buoy to the first mark.

The color groups will also be used to form balanced teams for team regattas.

Overall Series Score
In order to be eligible for an award, each participant must race in a minimum of heats. The number of heats competed in by the five skippers competing the most frequently is averaged, and 50% of that number is the qualifying number to be ranked.
Skippers not starting or competing (DNC) in a heat of a series regatta receive no points score. Skippers not finishing a series regatta heat will be scored as Did Not Finish (DNF) and receive a rank score of the maximum number of skippers competing in a heat on that day plus one. The final series ranking is based on descending decimal C-S score values.

Named Regatta Scoring
Points are awarded as finishing position equals points.
The Skipper with the lowest number of accumulated points shall be declared the winner of the regatta.
Ladies Regattas will use these rules.

There will be NO cancellation for temperature or wind speed value, as skippers can gauge for themselves if conditions are too adverse for their personal enjoyment. Cancellation due to intermittent periods of significant rain will be made at 1:00pm on the day of racing.
Cancellation due to broadly forecast rainfall or snowfall will be made as early as practicable to allow skippers to reschedule their time. This may be late Monday or early Tuesday morning.
Cancellations during racing may still be made by the ROs on the basis of safety. e.g. Lightning, significant rain.

The club holds a stock of parts, including bow bumpers for skippers to purchase on an immediate basis. See Garrett Van Koughnett or Peter Wilding.
Bow Bumpers: Are mandatory for all boats to protect everyone’s boat.
Class Approved Only.    http://www.rcyachts.com/store.asp?ItemID=111